Sedona's red rocks are famous all over the world.

From the very first glimpse of the glorious Sedona red rock country, visitors feel the majesty and mystery of a place sacred to its earliest prehistoric settlers. It’s been said, “God created the Grand Canyon but He lives in Sedona.” It is awesome yet it invites personal exploration.

Above the plains, canyons, and red rocks of Sedona, Arizona soar brilliantly hued cliffs and rugged spires of sandstone sculpted by eons of ocean tides and desert winds. It is a 25 square-mile enclave surrounded by vast stretches of national and state forestlands that make Sedona seem like a world apart.

Located two hours north of Phoenix, and 30 miles south of the Flagstaff peaks, Sedona’s mild four-season climate and high desert terrain assure good year-round weather for vacationers and outdoor enthusiasts. Oak Creek Canyon, a spectacular 16-mile gorge with streams and waterfalls between sheer rock walls, beckons hikers, campers and fishermen. It has been termed by Rand McNally as one of the eight most scenic drives in America.

Nearly four million travelers visited Sedona last year, rivaling the Grand Canyon, just 2 1/2 hours north, as a world class destination. Yet the influx does not disturb the small-town ambiance that is part of Sedona’s charm. Shopping plazas, gift boutiques, galleries and restaurants abound. Tlaquepaque–an Indian name meaning “the best of everything”–is modeled after a Mexican village, made up of quaint courtyards surrounded by specialty shops, galleries and restaurants.

First popularized by Zane Grey’s “Call of the Canyon,” Sedona became the backdrop for many films shot on location in the early ’20s. Since then, Hollywood has made the area its back lot, bringing the film stars of each era. Gene Autry, John Wayne, Henry Fonda, Rock Hudson, Elvis Presley and Robert DeNiro mingled with townsfolk who often appeared as extras. Several celebrities made Sedona their home, including Lucille Ball, Orson Welles, Jane Russell, Walt Disney, Sean Young, Donald O’Connor and Ann Miller.

As an art community, Sedona has found recognition worldwide. Surrealist painter and sculptor Max Ernst first settled here in 1950 and attracted other artists and writers of his time. In 1965, the Cowboy Artists of America was founded by a group of western painters as comfortable on the range as with oils. In the spirit of Frederic Remington, the group has created a significant genre of modern art.

Where artists flourish, so do galleries. Sedona boasts over 40 showcases for contemporary arts and crafts, as well as Native American arts. The cultural calendar is filled with gallery openings, art and music events, as well as local theater productions.

New Age settlers and spiritual seekers have found Sedona a very desirable location for healing and emotional rejuvenation. In the mid-1970s they proclaimed their discovery of four major electromagnetic energy sources called vortexes. Today a community of alternative healing practitioners provide a varied schedule of workshops and events.

When the day wanes, and the jeep tour, hiking and shopping have taken their toll, visitors turn their attention to the magnificent sunsets. It’s easy to understand why the Anasazi Indians chose to settle here centuries ago, and why Carl and Sedona Schnebly—-for whom our city was named—-made the same decision in 1902. 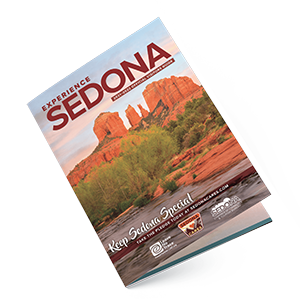