Slide Rock is America’s favorite Arizona State Park, providing a natural water slide that invites everyone to be a kid again.

Carved by the cascading waters of Oak Creek, the smooth sloping ledges curve downstream, carrying even the most resistant along in the current. Pools for swimming abound and trout fishing enthusiasts can wet their lines. Shaded by cottonwoods and sycamores along the canyon walls, hikers can explore the trails, and the less athletic can relax at picnic tables in the meadow.

Slide Rock exists as a State Park because of the personal experiences of Bruce Babbitt, Secretary of the Interior during the Clinton Administration. As a child, his Flagstaff family visited friends in Sedona to picnic and splash down the magical rock slides. In 1981, then-Arizona Governor Babbitt wanted to share those memories with his young son. The return visit, however, revealed that years of public misuse had taken its toll on the property. He was appalled and immediately initiated steps that would restore the original beauty of this setting. His appointed task force resulted in a non-profit foundation that purchased the land.

The 53-acre park was originally homesteaded by farmers in the late 1800s. Frank Pendley, one of the earliest landholders, was the first to successfully grow apples. His irrigation ditch, dug in 1912, still serves the orchards that flourish today. Several original structures, recently refurbished, remain in the park. They were used as sets for the 1953 film “Gun Fury” which starred Rock Hudson and Donna Reed.

In June of 1985, Bruce Babbitt stood where he had once played and dedicated the site to the State of Arizona. “This State Park will be developed in a manner that will honor some extraordinary pioneers.” he told the gathering, which included some proud descendants of Frank Pendley.

Sedona’s newest park, Red Rock State Park, was dedicated in 1991. With a mission of preserving the riparian habitat along Oak Creek, it offers an environmental information center as well as wonderful locations for hiking, biking, birding and fishing.

The 286 acres were originally part of the “Smoke Trail Ranch” owned by Jack and Helen Frye. Jack Frye, then president of TWA, purchased the land in 1941 to develop into their vacation retreat, and, in 1946, he started construction. Using stone, rock and timber from the area, the house resembled a pueblo. Much of it was built by the Yavapai-Apache Indians, who camped along the creek. The smoke from their fires led to the name “House of Apache Fire.”

The park affords three main trails designed to appeal to every energy level. The Smoke Trail follows the creek and is an easy half mile through the lush wooded area. The Apache Fire Trail of 1.7 miles includes the Frye property, and the almost two-mile Eagle’s Nest Overlook Trail offers spectacular views, as the name promises.

Protecting the ecosystem of the area requires unique rules. Swimming and wading are prohibited. There is no overnight camping, and visitors must remain on designated trails and roadways, and pack out what they bring in.

Sedona offers an abundance of hiking trails and photo opportunities, but you would be missing some of the best if you didn’t take time for these two magical, natural preserves. 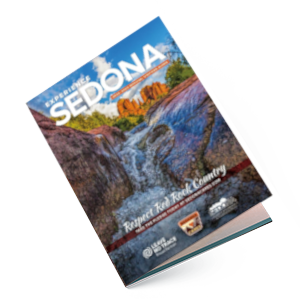