Springtime Along the River and the Rails

Verde Canyon Railroad offers an ideal vantage point to savor Spring in Bloom. The crescendo of color in the Verde Canyon begins in early March with the canyon’s canvas dotted with delicate purple wildflowers, like locoweed and night-scented stock, continuing into the season with orange globemallow and golden desert marigold. As the days grow longer, towering creamy white blooms of yucca wave in the breeze, and cactus flowers appear of such intense pinks and yellows they don’t even seem real. The Verde River supports a wide variety of animal and plant life, and the rare riparian Cottonwood-Willow corridor the train passes through makes up just 2 percent of Arizona ecosystems. 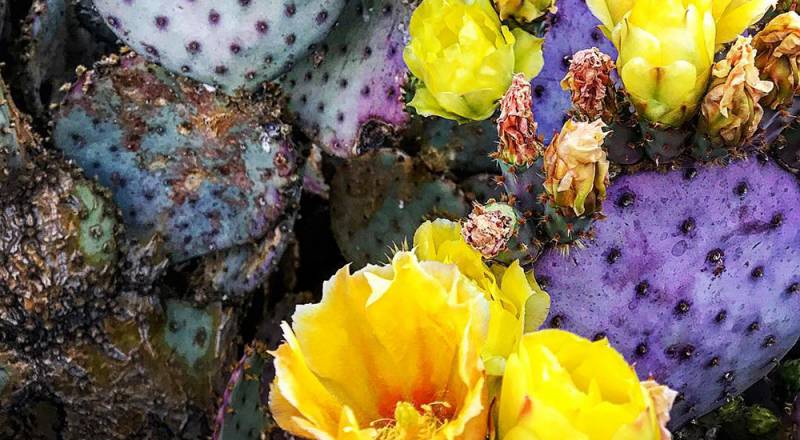 Showcasing a rare high desert riparian wilderness and an Arizona seldom-seen, Verde Canyon Railroad travels a historic train route completed out of Clarkdale in 1912, just a short drive from Sedona’s city limits. Nestled along the canyon’s twisting curves, the train takes passengers into a river-carved red rock wonderland in the heart of Arizona.

Springtime is synonymous with renewal as each day grows longer, greener, and animal parents welcome the arrival of baby birds, kits, pups, fawns and cubs. Bald eagle pairs in the area generally hatch eaglets in late February, raising their fledglings until they take flight on their own in late May. Verde Canyon Railroad has coexisted peacefully with the wildlife of the region for over 100 years and is renowned for being a great venue for viewing bald eagles, year-round. 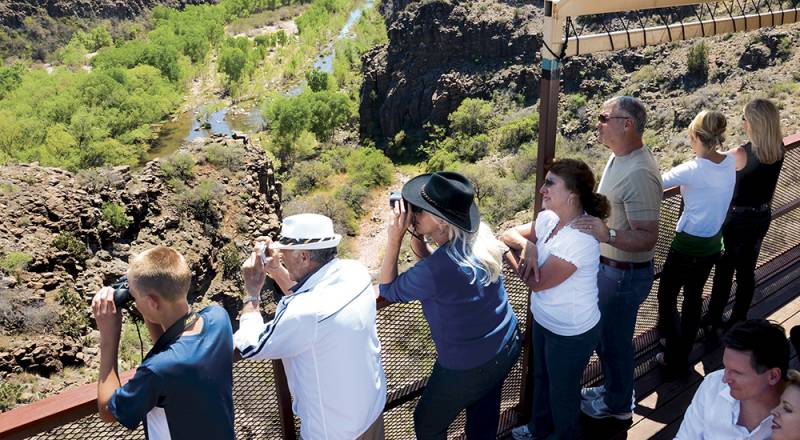 Every month year-round, educational presentations, Raptors at the Rails from Liberty Wildlife at the depot and aboard the train share a close-up glimpse of Arizona raptors such as eagles, owl, hawks, falcons, kestrels and vultures, and in the summer, cool-blooded creatures such as tortoises, lizards and snakes during Reptiles at the Rails. The train has long been a supporter of the Phoenix-based wildlife rescue, an agency that rehabilitates and returns to the wild thousands of injured animals each year.  The Verde Canyon is well known for its resident raptors and associated with eagles in particular, as its rocky cliffs and abundant river fish make it an ideal habitat. The train’s iconic twin 1953-built FP7 engines proudly wear the visage of our national symbol across the front of both the 1510 and 1512. 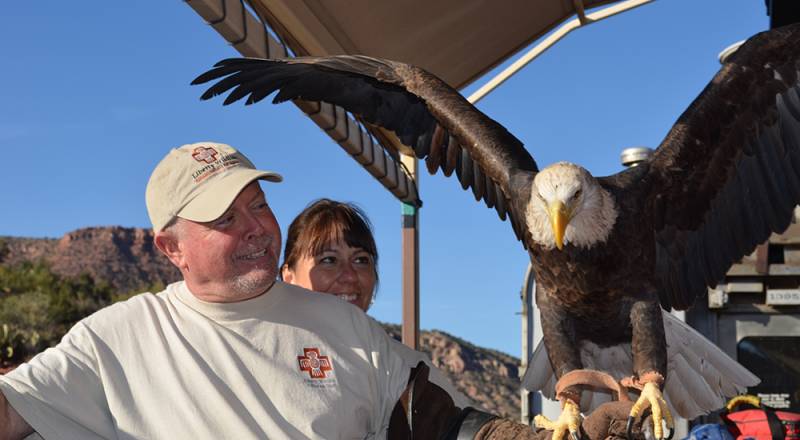 With luxurious First-Class accommodations, passengers forgo no comforts as they soak up the scenery streaming past during this 4-hour journey. Living-room style seating is predominant on the train: the consist is comprised of nine First-Class cars, one Coach-Class car and one Luxury-Class Caboose.  With complimentary open-air gondolas interspersed throughout the train’s quarter-mile length passengers enjoy two seats for the price of one. The private Caboose and First-Class provide individually packaged appetizers and a complimentary champagne or sparkling cider toast upon boarding. Full cash bar service is available in any class.

The train has been an integral part of life in the neighborhood for nearly 120 years, the locomotive horn a beloved tune heard throughout the valley, and the railroad business a keystone of the local economy; first, for the copper mining from Jerome and the smelter operations in Clarkdale in the first half of the 20th Century, and later as the “Verde Mix” for the medley of livestock, freight and passenger travel it carried. In 1990, “Arizona’s Longest-Running Nature Show” was reborn as the scenic Verde Canyon Railroad excursion train. Having recently celebrated “Thirty Along the Verde”, this Arizona treasure has carried over 2.5 million passengers through a beautiful wilderness accessible only by rail. 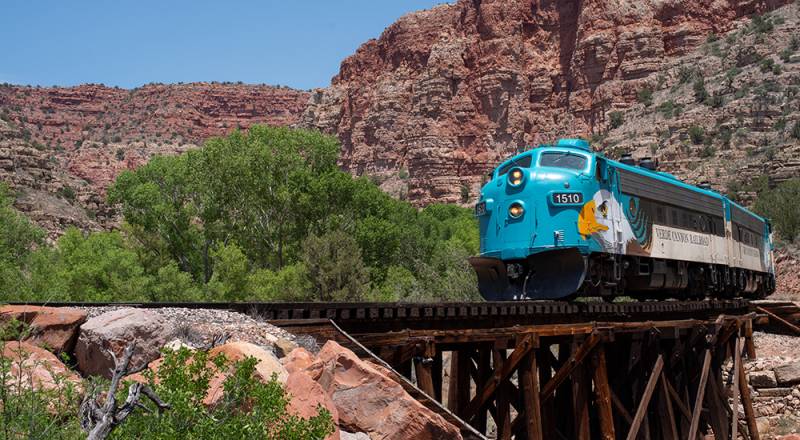 Spring echoes the time most popular with Sedona visitors, so Verde Canyon Railroad offers additional reasons to ride. By St Patrick’s Day, the scenic Verde Canyon has begun the “wearing o’ the green.” It is said that everyone is a little bit Irish on St Patrick’s Day so to celebrate a selection of Irish ales will be available for purchase on March 17th. Raise a glass of Harp or Guinness on the patio and toast to St. Patrick. He may have driven the snakes out of Ireland, but he’d have his work cut out for him in Arizona!

The Black-footed Jackrabbit may be Arizona’s largest hare, but not on Saturday, April 3rd, when the train welcomes a visit from a beloved seasonal employee, the Easter Bunny. Hopping, high-fiving and posing for keepsake photos at the train’s depot prior to the train’s 1:00 p.m. departure, the Easter Bunny will share wrapped candy and lots of enthusiasm with all depot guests.

On May 5th a Cinco De Mayo fiesta celebration featuring Mexican-themed lunch options along with Margaritas and Mexican beer on the depot patio prior to boarding time. 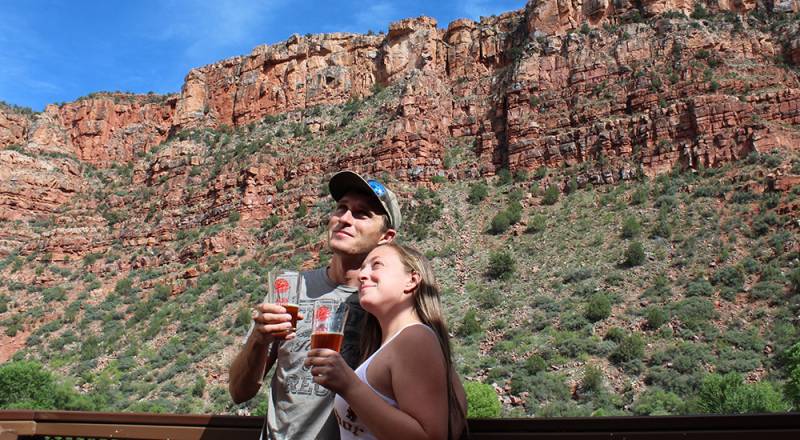 Further down the tracks, as Spring melts into the warm glow of summer, Starlight and Moonlight rides on select Saturdays each month May through September will travel the canyon through the brilliant variation of colors at sunset and twilight. Starlight rides follow the new moon when the cosmic constellations are at their brightest, and the Moonlight run coincides with the brightness of the full moon’s glow, illuminating the Verde Canyon in otherworldly fashion. The train’s popular Grape Train Escape wine-tasting events will take place as an optional upgrade in specific cars during the Starlight rides. Since 2003 this celebration of vino has presented vintages from the best wine-growing regions throughout the globe, including those very near and dear to Sedona: Verde Valley wineries.

Known worldwide, Verde Canyon Railroad promises rail passengers exceptional service aboard every journey. Over the past three decades the train has expanded in size, number of employees and amenities, but has never lost its commitment to preserving, protecting and presenting to the world the rare red-rock riparian wilderness it calls home. Visit the website at www.VerdeCanyonRR.com for additional information or to make a reservation or call the friendly reservations staff at 800-293-7245. 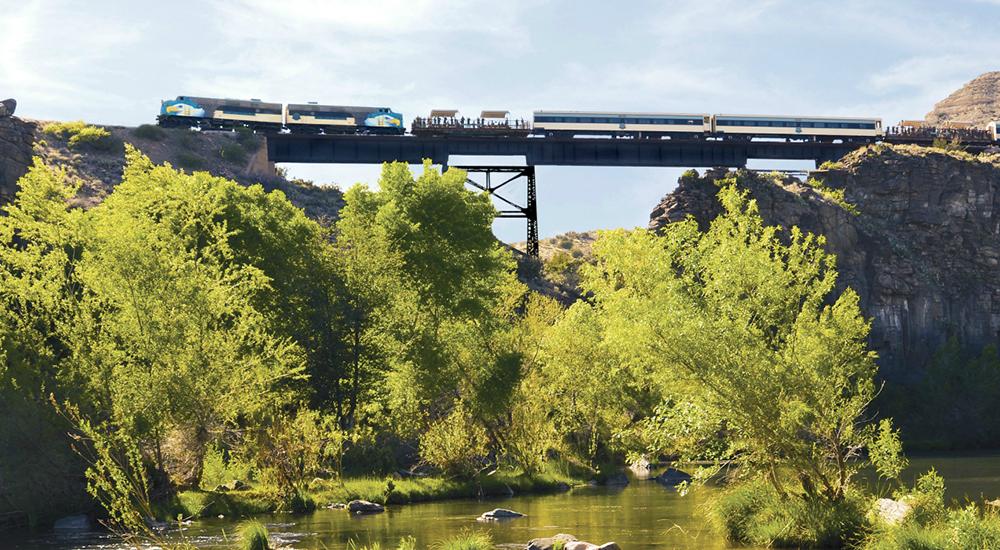