an excellent time for reflecting on past successes while laying the groundwork for a future whose possibilities are limited only by our imagination.

The beginnings of what Astronomy magazine editor Dave Eicher has called “America’s Observatory” may be dated back to 1858, when a three-year-old boy in Boston stood in awe “halfway up a winding staircase, gazing with all his soul where (a) stranger stood,” as the lad later recalled. The mesmerized observer was Percival Lowell and the specter-like stranger was Donati’s Comet.

This tantalizing experience sparked a fire of imagination deep within Percival’s soul that ultimately drove him to erect a temple of knowledge where he could pursue firsthand his quest for exploration, discovery, and wonder. Thus was born Lowell Observatory, a factory of awe where generations of erudite astronomers have pushed the boundaries of our knowledge and imagination while pilgrims from around the world come to experience that feeling of awe that inspired young Percival.

In honor of Lowell Observatory’s 125th anniversary, here are six things for which it is best known: 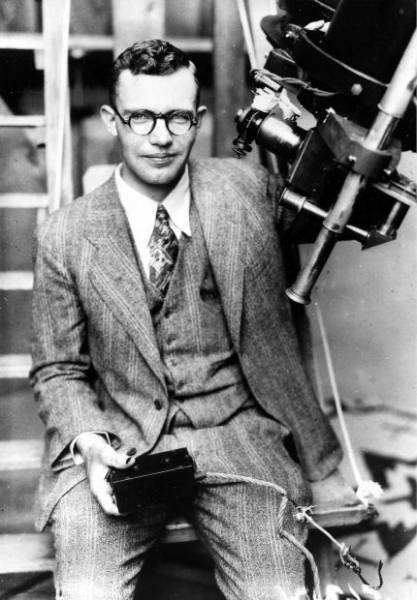 The Discovery of Pluto in 1930

In 1905 Percival Lowell began searching for a theoretical 9th planet in our solar system that he called Planet X. Lowell died in 1916, having not found the planet, but a dozen years later Clyde Tombaugh picked up the search and in 1930 discovered Pluto. Since then, Lowell scientists have played a key role in nearly every major Pluto discovery, from the detection of its atmosphere and moons to the breathtaking flyby of New Horizons. Today, visitors to the observatory can retrace the gripping story of Pluto’s discovery, seeing the telescope and related artifacts he used for the discovery and learning the painstaking steps he took, at 24 years of age, to discover the solar system’s ninth planet. For more information about Pluto, from its discovery in 1930 to results from the New Horizons Mission that flew by this icy body in 2015, Read More 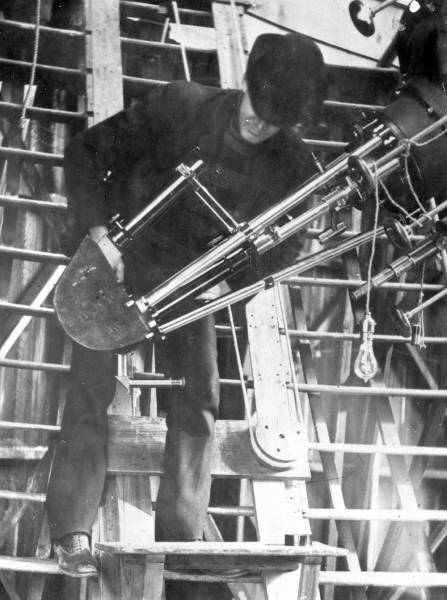 The First Evidence of the Expanding Universe

Astronomer Vesto Melvin “VM” Slipher began working at the observatory in 1902. One of his first projects was to learn how to use a spectrograph, an instrument that, when attached to a telescope and pointed to a celestial object, can allow scientists to determine that body’s composition, as well as if it’s moving away from us or towards us. Over the next decade Slipher mastered using the instrument and pioneered many new techniques with it. Starting in 1912 he used the spectrograph to observe a number of distant fuzzy blotches and soon realized they were moving at incredible speeds, mostly away from us. These observations helped revolutionize scientists’ understanding of the universe, showing that it must be much older and vaster than previously thought. We now know Slipher was observing what we know today as galaxies and his research findings represented the first evidence of the expanding nature of the universe. The telescope, spectrograph, and associated instruments are all on display today for visitors to see. 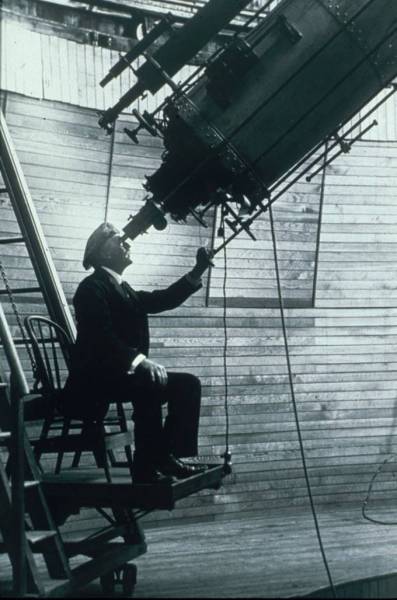 Many centers of research feature some intriguing character in their past but few, if any, of these characters match the aura and distinctiveness of observatory founder Percival Lowell. Scion of a Boston Brahmin family, he was a gifted writer and orator who mesmerized people with his provocative ideas of intelligent life on Mars. His influence transcended science and into popular culture, where he developed a consciousness about possible extraterrestrial life that stimulated writers such as Edgar Rice Burroughs and H.G. Wells. A century after Lowell’s death, his presence is still felt at his beloved observatory. Guests feel like they get to know the man, hearing stories about him on tours while seeing a variety of related exhibits. His first telescope—which his mother gave to him on his 15th birthday—is on display and guests may view through his vaunted 24-inch Clark Telescope in the evening.  Lowell is even buried on site, in a Saturn-shaped mausoleum topped by a beautiful cobalt-blue glass dome. 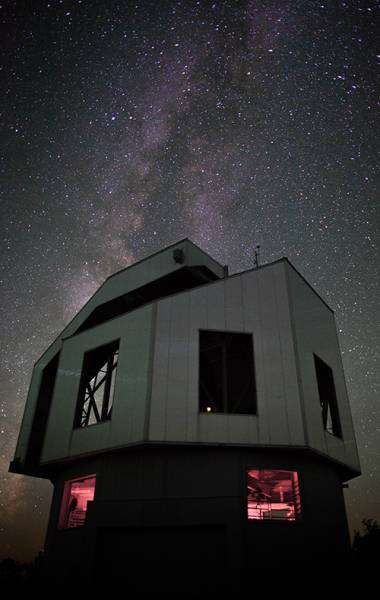 Owned and operated by Lowell Observatory, this is the fifth largest telescope in the United States and one of the most powerful in the world. Retired observatory Director Bob Millis has called it the Swiss Army knife of telescopes because of its adaptability for a wide range of astronomical research. Scientists from Lowell and its partner organizations use this instrument on every clear night to study the far reaches of the universe, continuing the long tradition of cutting-edge research here in northern Arizona. This telescope is located 40 miles from the main Lowell Observatory facility and not open for tours. Yet through exhibits and programs by observatory educators, visitors to Lowell may still learn about the facility and discoveries made there. Anyone with Internet access can also see some of the images captured with the telescope. 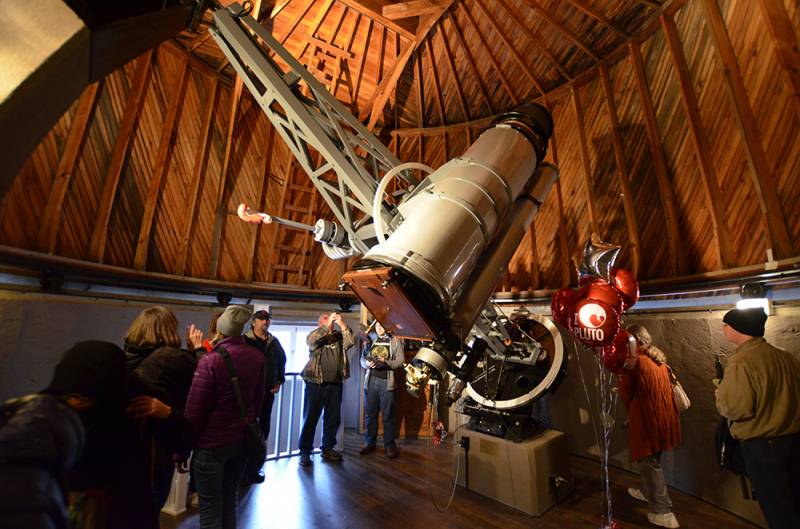 Percival Lowell’s original intent in founding his observatory was to carry out astronomical research. But from the beginning he also wanted to share the results of his research with society at large, enabling people around the world to be his co-discoverers, as it were. In those early days Lowell and his assistants invited town people to visit the observatory and peer through one if its telescopes. That openness to the visitors evolved into a full-fledged public program that welcomes guests daily from 10 am to 10 pm (except on Sunday, when the observatory closes at 5 pm, and a handful of major holidays).

Brand new to the visitor experience is an OmniGlobe, a four-foot-diameter, interactive sphere that displays animations of planets as well as earthbound phenomena such as weather and plate tectonics. But this is just the beginning of things to see and do at the observatory. Daytime visits include tours of historic buildings and programs about different aspects of astronomy and space exploration. In the evening, guests may participate in stargazing demonstrations and view through telescopes at planets, the Moon, star clusters, galaxies, and other marvels of the night sky. This experience will soon expand with the new Giovale Open Deck Observatory, which features a building that rolls back on tracks to unveil a patio with six powerful telescopes for public viewing. This facility is due to open this fall and is the first component of the public program expansion that, over the next several years, will see the addition of a new, state-of-the-art visitor center that includes a roof-top observing plaza with heated seats. For more information about hours and programs, More Information

Throughout this year, Lowell Observatory is celebrating its 125th anniversary with a variety of special events and activities for the public. The peak of this celebration will occur from June 6-8. Click here for details about these and other events, 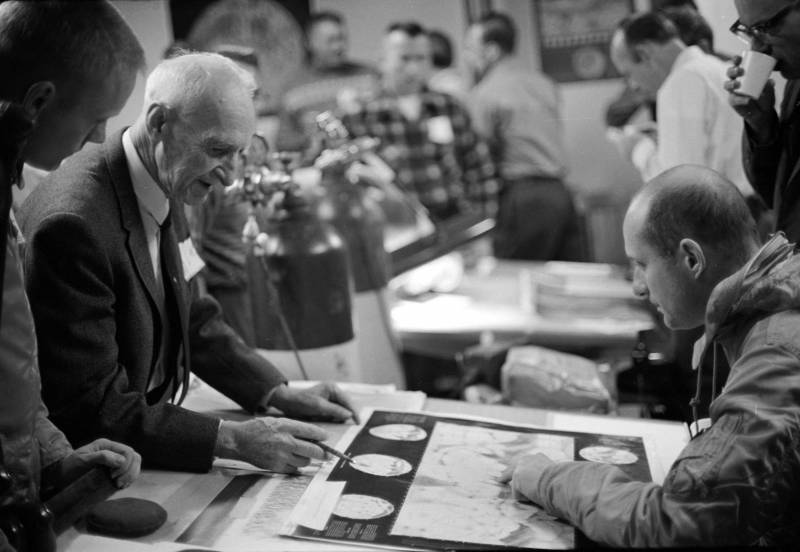 Moon Mapping in Support of the Apollo Missions

In this, the 125th year of Lowell Observatory’s existence, we also celebrate the 50th anniversary of the first manned Moon landings. On July 20, 1969 Neil Armstrong set foot on the Moon, taking his “giant leap for mankind”. Much of the Apollo astronauts’ scientific training for this and later Moon missions happened right here in northern Arizona. At Lowell, for instance, a team of scientists working with artists created detailed lunar maps, while some of the astronauts viewed the Moon close-up through the historic 24-inch Clark Telescope. To celebrate the Moon landings and the role Lowell played, the observatory is hosting a variety of tours, special presentations, and exhibits. Lowell is also one of the key players in the Flagstaff Lunar Legacy celebration, which celebrates all of northern Arizona’s scientific contributions to the Apollo effort. 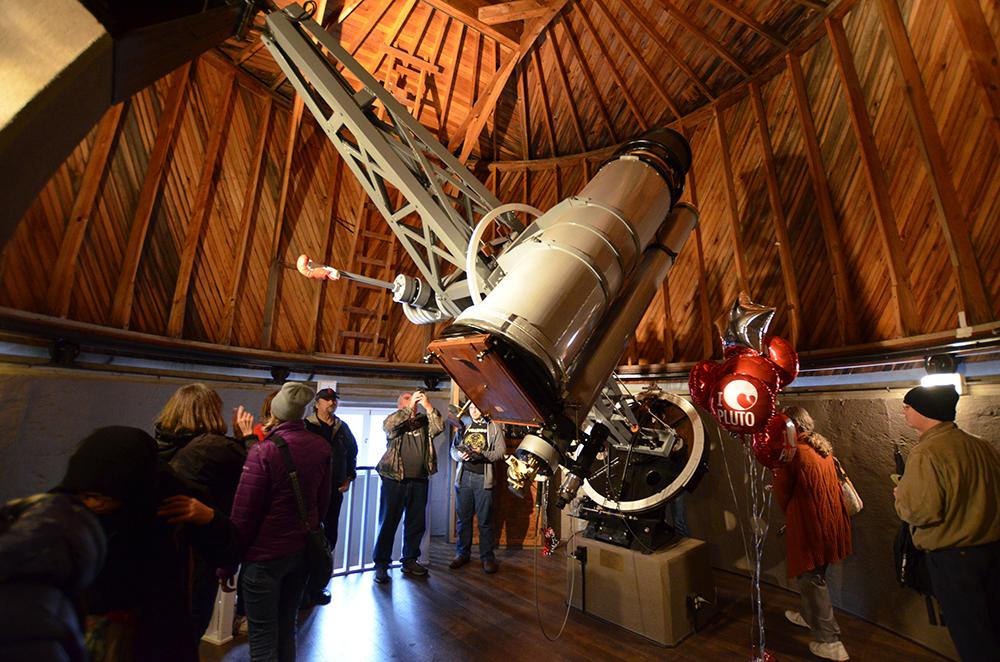 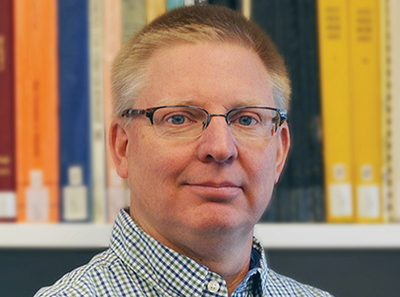