She was a painter, sculptor, memoirist, novelist and poet. She was a force of nature crossing the century mark and producing work through her very last days. Tanning was famous first for her surrealist paintings, later for her abstract “prism” pieces, yet again for her soft sculptures and finally for the power of her prose and poetry.

Yet the label she detested was one frequently bandied about. Tanning did not like to be referred to as a woman artist. In a 1990 interview, she expressed her disdain for the term.

“Women artists. There is no such thing—or person. It’s just as much a contradiction in terms as ‘man artist; or ‘elephant artist.’ You may be a woman and you may be an artist, but the one is a given and the other is you.”

During the 1940s, Dorothea Tanning lived in Sedona with her husband, Dadaist legend Max Ernst. They built a rough-hewn two-room house and basked in the town’s “landscape of wild fantasy,” as she wrote in her autobiography. 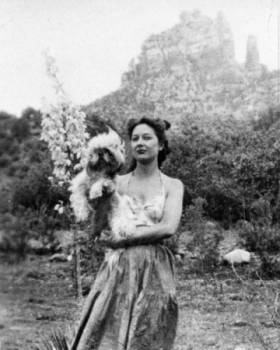 Yet it was only one slender chapter of an amazing journey. Born in 19190 in Galesburg, Illinois, Tanning felt the artistic calling from an early age. She moved by herself to Chicago when she was 20 to study painting. She had $25 to her name. Although her formal schooling would be short-lived—she spent only three weeks at the Chicago Academy of Fine Art—she embarked on a wide-ranging education.

She worked as an artist’s model, an illustrator and a marionnettist at the World’s Fair. She mingled with bohemians and eccentrics and dated gangsters before moving to New York in 1936. When she visited an exhibition of Fantastic Art, Dada and Surrealism at the Museum of Modern Art, it reinforced the direction of her work, which often seems like bold illustrations of her dreams.

Tanning first met Ernst in 1942. He became enchanted with her iconic self-portrait Birthday, in which she appears topless wearing a dress of tangled tree roots with a wide-eyed winged mammal crouching at her feet and an endless recession of doors open behind her. 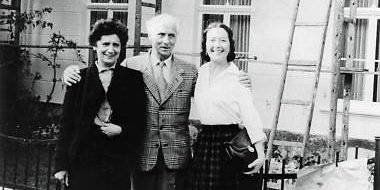 Ernst was just as smitten with the artist and the two became inseparable. They lived first in New York but soon moved to the obscure hamlet of Sedona, drawn by the sweeping panoramas and Native American culture. At that time, Sedona supported a population of only a few hundred people.

They bought some land and built a small house, which Tanning named Capricorn Hill, although she wasn’t sure why. As she wrote in her autobiography, “Alone it stood, if not crooked at any rate somewhat rakish, stuck on a landscape of such stunning red and gold grandeur that its life could be only a matter of brevity, a beetle of brown boards and tarpaper roof waiting for metamorphosis. Up on its hill, bifurcating the winds and rather friendly with the stars that swayed over our outdoor table like chandeliers.”

While Ernst worked in a studio around back, Tanning painted in the house. Both embarked on productive periods, inspired by the dramatic colors and ever-changing light that was now part of their daily lives. Tanning completed one of her most famous works during her time in Sedona. Self-Portrait reveals a small figure amid a landscape of towering monoliths scraped by an epic sky.

The presence of Ernst and Tanning marked the beginning of Sedona’s rise as an artistic center. The quiet community of such phenomenal beauty was about to be discovered by creative types. Tiny though it was, Capricorn Hill played host to a stream of renowned visitors from the arts world including Henri Cartier-Bresson, Lee Miller, Roland Penrose and Dylan Thomas.

Eventually, the couple relocated to France, living in Paris and later Provence. In the early 1950s, Tanning’s painting broke away from narrative surrealism as she began exploring a more abstract aesthetic. Her images became more furiously fragmented. Bodies and biomorphic forms floated in dream spaces.

“Around 1955 my canvasses literally splintered… I broke the mirror, you might say,” she would later explain.

By 1969, she had moved on to soft sculptures stuffed with wool. She created them on an old Singer sewing machine. Even when her art took an abstract turn, it was always suggestive of the female form. A depiction of women was a key element of Tanning’s work and she had a profound influence on subsequent generations of artists.

Ernst died in 1976 and three years later, Tanning returned to New York. She continued to paint, draw and make collages. Exhibitions of her work took place in New York and in cities across Europe. In her 80s, Tanning’s attention turned to the written word. She would go on to publish two memoirs, a novel (when she was 94) and two volumes of poetry. 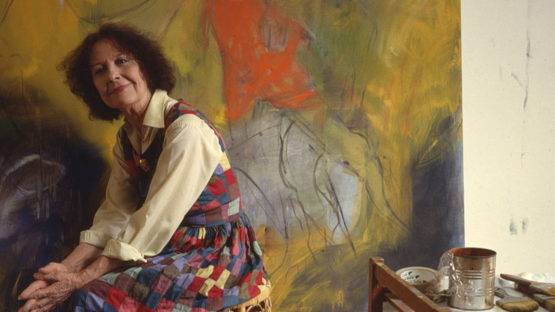 Dorothea Tanning died in 2012 at the age of 101. Many obituaries referred to her as a woman artist, and also as the wife of Max Ernst, which seems to perhaps unintentionally diminish her own accomplishments. She was an artist, pure and simple. And certainly one that defied labels.

Through the decades she continued to grow and evolve as an artist, pushing beyond acceptable boundaries. She didn’t just follow the road less traveled—she forged her own path through a haunting, colorful dreamscape and then left directions for the rest of us.

“I think I’ve been a renaissance man,” said Tanning in one interview. “If he could have been a woman.”

Read more about the Arts in Sedona. 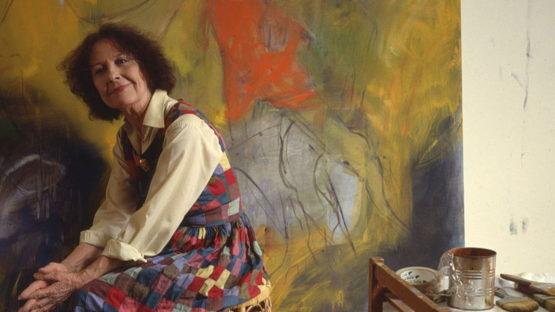 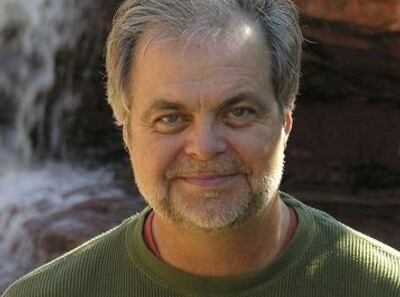