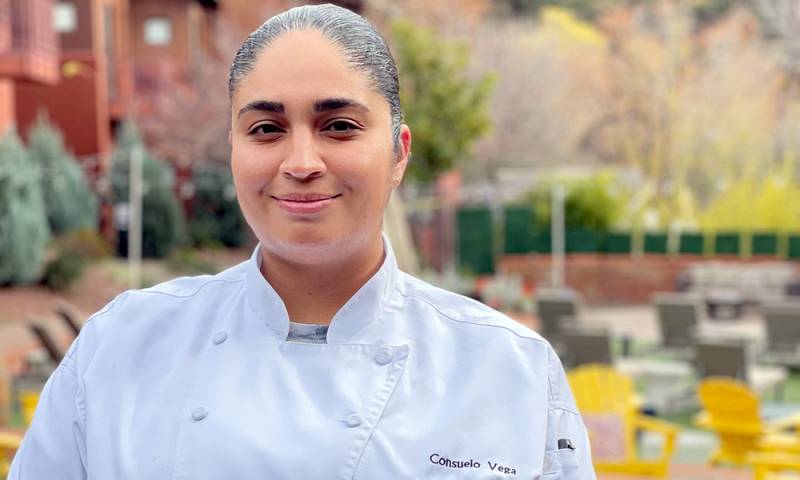 As the executive chef of SaltRock Southwest Kitchen at Amara Resort and Spa in Sedona Ariz., Consuelo Vega is a seasoned culinary professional with more than a decade of experience operating at numerous renowned dining destinations across the country, from the Atlantic Coast to the Rocky Mountains and now, the Southwest.

Having filled just about every restaurant position there is from front- to back-of-house throughout her career, Vega was initially introduced to the world of fine dining through a Disney World internship in Orlando, Fla., where she apprenticed as a line cook assistant under the direction of celebrated chef and TV personality Cat Cora. Vega then continued to grow her skill set through impressive tenures over the next five years with some of the largest and most well-recognized private catering companies and country clubs along the southeastern coastline, including the Augusta National Golf Club in Augusta, Ga.

A desire for a change of scenery and to be closer to family later inspired Vega to make a cross-country move out west – first to Denver, Colo., where she worked most recently as a sous chef at Narrative, The Autograph Collection Jacquard Hotel’s iconic signature restaurant, as well as a chocolatier and pastry chef for a prominent cannabis confectionery manufacturer; and then to northern Arizona’s red rock country, where she was appointed to lead and oversee operations for both the SaltRock restaurant and Amara Resort’s private meeting and event venues.

Having grown up in a traditional military family that frequently relocated throughout her childhood, Vega credits her long-standing love for food to the comfort and familiarity it provided as she adjusted to each transition. As a Cuban- and Dominican-American, she found herself naturally inclined toward Latin- and Caribbean-style cooking, but her experience living in the south also inspired an appreciation for the region’s staple Cajun and Creole fares. Although she struggled to accept the military lifestyle as a child, Vega grew to embrace how her unique background seemed to have afforded her invaluable interpersonal and adaptability skills, as well as an exposure to numerous, rich cultures and cuisines outside of her own – a combination of influences that have ultimately made her into the successful, innovative chef that she is today.

Vega holds an associate’s degree in culinary arts from Johnson & Wales University in North Miami, Fla., a bachelor’s degree in business and hospitality from the Excelsior College in New York, and numerous professional certifications from the Federation of Dining Room Professionals, ServSafe, and the National Registry of Food Safety Professionals. When she’s not in the kitchen perfecting her craft, she looks forward to exploring all that Sedona has to offer and spending quality time with her pup, Chloe.

Nestled in an ideal location-creek side in Uptown Sedona with picturesque Red Rock views.…