1st Friday in the Galleries highlights Sedona’s art matriarch, Ruth Holland Waddell who just celebrated her 97th birthday. As a contributor to the arts, she and her husband created an enclave for artists, dancers, musicians and apprentices who lived and worked at the Waddell Studio. Her work is featured at the Sedona Arts Center. 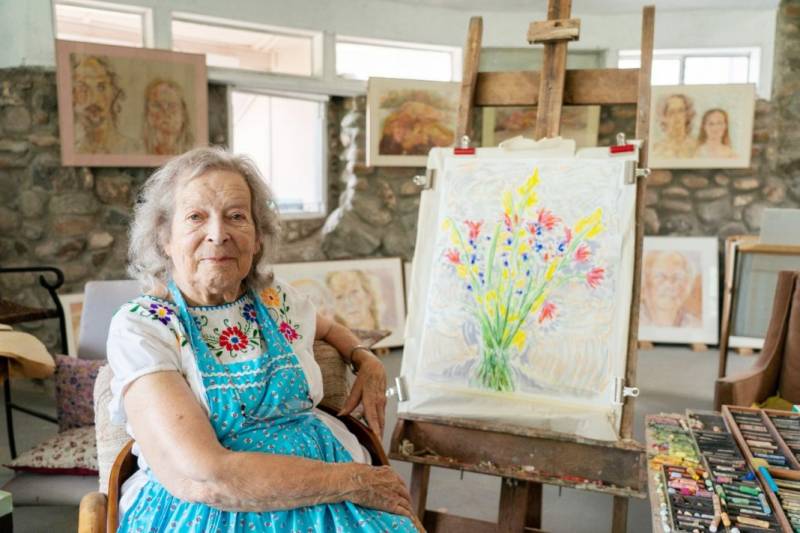 Step inside the studio of Ruth Holland Waddell.

Brightly lit with natural light, it’s the perfect space for an artist to create. On one side, is the work of her late husband, John Henry Waddell [Feb, 14, 1921- Nov. 27, 2019]. His sculptures are displayed along a huge wall, each having their own proper place. They show­case the varying movements of the human body, posed in such a way that they appear to be alive, even though they are coated in bronze.

On the other side of the studio, Ruth Waddell’s paintings are propped up against a stone wall. They are lined up in such a way that each one appears to be telling a story. Waddell is a storyteller. Her paintings are layered with human emotion — hers. It’s intricate and somewhat revealing. Yet, she’s secretive about divulging her intentions with her art. She prefers that the viewer develop their own interpretation of her work and come up with their own conclusions. If you ask her to explain one of her paint­ings, she will kindly smile and then bluntly tell you that it’s up to you to figure it out.

“Most of what I do is down to earth,” Waddell said. “When I am drawing, it’s not just the tree; I am drawing about the life of the tree, and it becomes my life. My life has merged into that tree. It’s not a tree I am drawing; I am telling a story. I don’t have to tell anyone that story. I just draw it. I go as far as I can go with the painting, and then, when I can’t go any more, it’s done and I have to accept it.”

A Life in Art

Born Ruth Holland on Nov. 25, 1925, she grew up in a family of four children in Chicago, where art was always a part of her life.

Her mother, a soprano, played piano and encour­aged her children to learn music and art.

Her father was not an artist, but had twin cousins, Raphael and Moses Soyer, who were acclaimed painters. Their work can be found in most major U.S. museums, including the Metropolitan Museum of Art, the Whitney Museum of American Art and the Los Angeles County Museum of Art.

“I was 5 years old, and I remember asking my mother to start a drawing for me,” she said. “She would draw the head and I would do the rest. During that time, most of the art was figurative drawing, so I would sketch my mother, father, brother, my hand, foot and myself. If you took a nap, you could bet that someone would be sitting there drawing you asleep.”

She attended the Art Institute of Chicago and it was there she met her future husband through her brother Joshua. Ruth and John married in 1949.

“Before I married, I was a young woman who was achieving independence,” she said. “That was impor­tant to me, and I did feel that I achieved independence. I had parents that gave me a sense of security. When I married John, I consciously and happily gave that up. That was my attitude at the time. It was a celebration.”

Waddell says that her life has never been based on achievement. She was focused on her husband’s needs and then their children became her next priority. 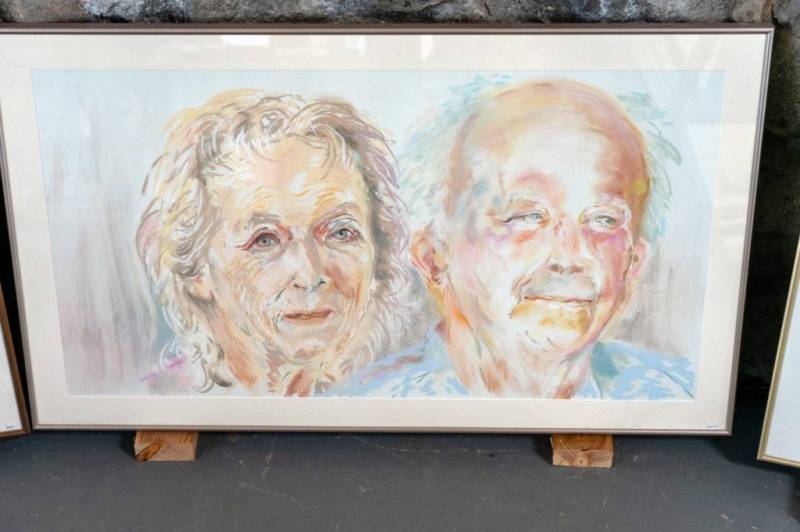 Ruth Waddell painted a self-portrait of herself and her late husband, John Waddell. Ruth was his muse during her younger days while he sculpted and he became her muse while posing for a portrait later in life. Photos by David Jolkovski/Larson Newspapers

“John gave me a very interesting life — different than I would have had without him — definitely,” Waddell said. “He was always tackling things that were way beyond what anybody could possibly do. But he was a magnet and he got people enthusiastic with what he was doing.”

Waddell explain that they were all struggling artists, and she still is.

“This is my livelihood. Aside from a little social security, I don’t have this great pension that rolls in,” she said. “John has given me a very wonderful and interesting life. It brought struggle — but even struggle is very alive. We shared a lot. His relationship with his models was sacrosanct. Eventually, he invited me to join him in the studio. But in the earlier years, I tried to be protective of him, especially while he worked.” 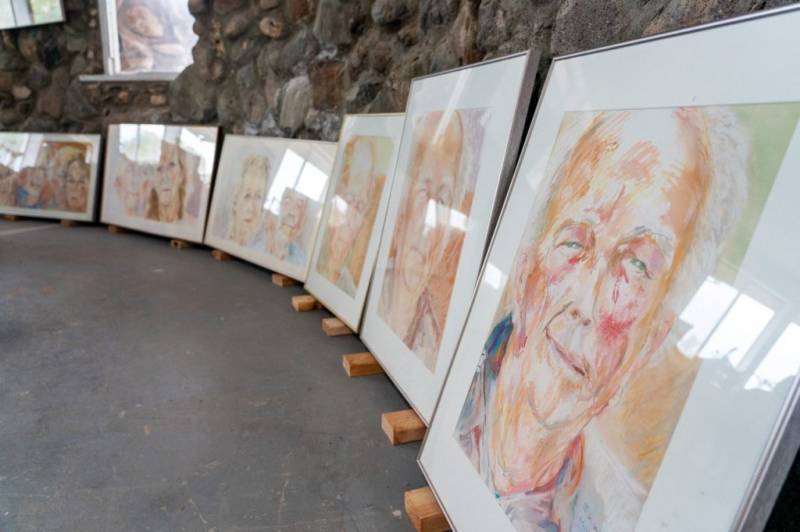 Together, Ruth and John Waddell were collabora­tors in art and life. During different times, they were each other’s muses. She posed for him while he did his sculptures and he for her as she painted his portrait. Switching to sculpture, she learned to appreciate the abstractness in his work. She found endless discoveries in his pastels and paintings throughout the years.

“That doesn’t mean his influences get into my work. I have a different way of working, a different approach and different things that motivate me. I love his work and I appreciate it.”

Today, Ruth Waddell paints flowers. She loves flowers and they inspire her.

“The flowers I now paint have a bit of abstraction to them. There is no definition really. There is some activity going on in the background. It’s like my doodles and I decided I wanted to incor­porate that into the work. The thing about being an artist is that you have to keep learning. Art can be scary. You have to translate the experience of three dimen­sions of life onto a two-dimensional surface. I don’t know if I am improving — it has to do with motivation. If you are motivated you are going to do it. It get’s better because you learn, discover things like how color works together, and you just learn by experience — like anything in life. Life is designed for us that way. We have to learn by experience, and finally, when we have all this good experience, life is over.”

In addition to her painting, Waddell spends her time working in the studio and doing administrative duties for the Waddell Studio and Sculpture Garden. Her husband and partner of 70 years died the day before Thanksgiving, on Nov. 27, 2019, at age 98.

“You can feel his presence through his work,” she said.

Waddell’s sculptures blanket the property both inside and outside the studio. Since her husband’s passing, the question remains as to what will happen with the studio and sculpture garden.

“It’s beyond me to plan for it. Amy, our daughter, is the one who is active in designing a plan for this space and it’s consistent with what we have already done here. Whether or not this will come to fruition, I don’t know. It’s more than I can tackle. All these big questions like, what to do about John’s work? What about this place? I live in the moment. I really do live in the present, so here I am. John has a legacy — it’s all around us here at the studio.”

Time heals with the passing of a loved one. Yet Ruth can feel her husband’s presence almost every day.

“I am going to cry, if I talk about it, but I say that I am alright. It’s very different. In the beginning, John was in my dreams all the time. I would picture him on the chair and I was sitting on the couch in our living room, but now, I don’t see that anymore. There is a transi­tion that happens. It’s not the same,” she said.

As Ruth Waddell’s life is transitioning without the love of her life, She just celebrated her 97th birthday on November 23. She accepts where she is in the moment knowing that now is all there is. Ruth's artwork can be found at the Sedona Art Center.

Sedona's finest art galleries invite you to enjoy a special evening of openings, special guests, artist receptions and celebrations at their 1st Friday in the Galleries from 4 - 7 p.m., but times will vary per location. It is free and everyone is welcome to attend in multiple locations in Tlaquepaque Arts & Shopping Village (336 State Route 179), Hillside Sedona, Hozho, Uptown Sedona, West Sedona (Harkins Plaza) and the Village of Oak Creek (Village Gallery of Local Artists.)

1st Friday in the Galleries

February 3, 2023. Sedona's finest art galleries invite you to enjoy a special evening of… 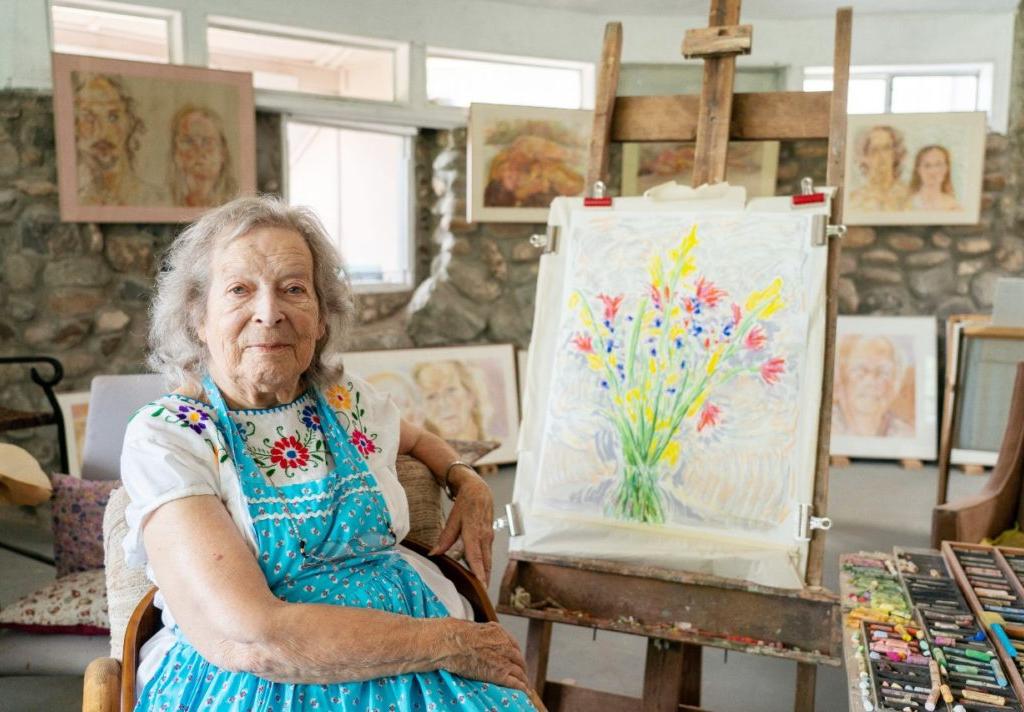 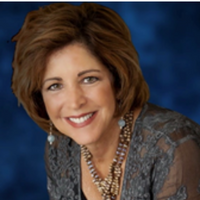